There was a time when Lions roamed across the Asian continent – especially from Palestine to Palamau. These animals, over the past decades, have progressively wiped out their range. They have eventually being narrowed their numbers to a relict population in the Gir Forest and its surrounding areas in Saurashtra. It has been a home of the only lion population outside Africa for five consecutive decades. Due to the political chaos in central Asia, many Timurid princes, including Babar, fought for their inheritance. Zahiruddin Mohammad Babar, who was known for his inexhaustible energy to conquer, did it even though the illustrations lineage from Timur was on the paternal side. 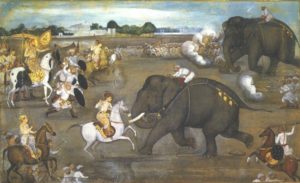 Zahiruddin Mohammad Babar was born in 1483; he was living in Central Asia until 1526. He found Hindustan different from the lands he had known; i.e., northern fastness of Central Asia and Afghanistan. A keen hunter, Babar describes the country he had conquered. As per his descriptions, he described Indian fauna and avifauna are unique creatures because these were not available in his homeland. He described that the peacock, the rhinoceros, and other animals or birds he saw are hard to beat. 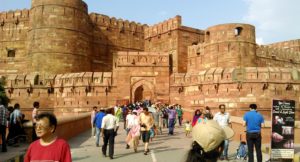 Humayun’s irregular schedule was fraught with many a calamity and was finally cut short by an untimely accident. The chronicles of his times were committed to paper years after his death by his daughter and also his ewer-bearer, at the command of Akbar. Such things throw no light on his interactions with lions. 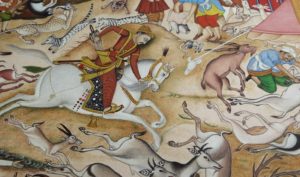 Apart from the consolidation of his domains, Sultan Akbar was known for his passion of hunting. A variation of this method was the Shakhbandh which was an enclosure. In these methods of hunting the objects of the pursuit would usually be ungulates and lesser carnivores. In one such, a fence at Lahore, Akbar hunted for five days in 1567, and the bag included nilgai, chital, jackal, hare, hyena, and blackbuck run down by trained cheetahs – as can be seen from the paintings commemorating the event. Among the favorite forms of sport at the time were coursing with trained cheetas and hawking, both of these being pursued by the Mughals till the end of the dynasty’s rule. Later, Birbal’s advice inspired him to leave hunting. 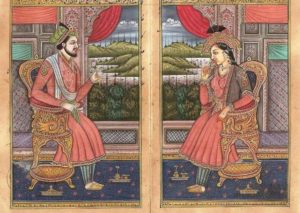 Thomas Roe, an English diplomat of the Elizabethan and Jacobean periods, reports that the imperial standard sported a couchant lion and the rising sun. A painting by Payag from the Padshahnama, the chronicle of Shah Jahan’s reign by Abdul Hamid Lahawri preserved in the Royal Library, Windsor Castle, depicts the siege of Qandahar in the Deccan in 1631 by Shah Jahan’s army led by Nasiri Khan. 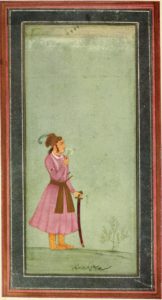 When the Mughal emperors moved with such large entourage, their pleasure spots had to be easily accessible from their camps, so it was natural that the imperial hunting grounds were located in the plains. Irfan Habib lists sixteen such locations, including Bari and Rupbas near Agra, Sunam and Bhatinda in Punjab, and Merta and Jodhpur in Rajasthan. This meant that the Mughals were moving about in or near the most preferred habitat of the lion, the vast grasslands, and scrublands on North India. 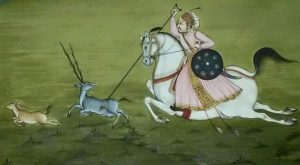 In the eleventh year of Jahangir’s reign, he records that in 39 years, as many as 28,532 animals and birds were hunted in his presence of which he himself accounted for 17,167. Lions take pride of place for they appear at the top of the list of the tally and the records that he had shot 86 of them. Not surprisingly, one of the finest studies of an animal in the Mughal painting is a painting of Jahangir period; ”lion drinking water after devouring its skill” attributed to Nanha circa 1618, preserved at the Sawai Man II Museum, Jaipur.

One Thought to “HUNTING STORIES: MUGHAL RULERS WERE PASSIONATE ABOUT LION HUNTING”