Following an advisory from the union home ministry, the nine-party functionaries got the dismissal letter certainly. The union home ministry asserted from that the creation of these posts had become void. One of the functionaries that got dismissal letter was Atishi Marlena, who was an advisor on education to the Aam Aadmi Party led Delhi Government. A considerable controversy broke down on her dismissal as she was associated in drafting the manifesto of the party in the assembly elections of Delhi and has served as an advisor from July 2015 to April 17, 2018. The struggle between the Delhi Government and the Central Government has once again escalated due to the cancellation of her appointment from the post of an advisor on education to the AAP-led Delhi government.

What was the significant work done by Atishi Marlena?

She was one of the most critical persons for the state government in the effort in the field of education, according to the education department officials. Since the beginning of the year as an advisor to the deputy chief minister and education minister Manish Sisodia, she has held nearly 120 meetings, which is roughly eight meetings per week. In addition to this, she was the point-person for eight key projects for Delhi’s education. 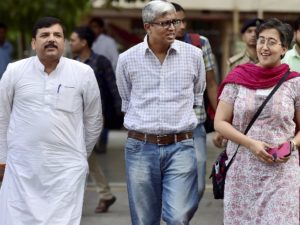 The project included teacher development coordinator programme that was precisely designed for the creation of a platform for peer learning among young and talented teachers. The project aims to deal with the restructuring the directorate of education and with the grievances and input from the school management committees in Delhi. Moreover, the project handled by her also include mission Buniyad that was designed by the state government to improve learning levels of primary as well as secondary students in the state of Delhi.

The importance of Atishi Marlena

“She was instrumental in the process of improving the education system in the state of Delhi”, the deputy CM of Delhi said while praising the efforts of Atishi Marlena. He further added that she was also instrumental in designing the happiness curriculum, which aims to increase the happiness equality levels of students in various government schools in Delhi. She also worked to strengthen regulations on private school fees. Moreover, she was also credited with organizing parent-teacher meetings in Delhi government school. During one such session in the year 2017, nearly 1050 schools of the national capital participated in the meet. 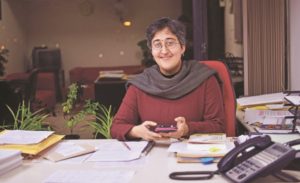 She was the daughter of Vijar Kumar Singh and Tripta Wahi, who were professors in the Delhi University. After completing her school education from Springdales School in New Delhi, she studies history from St. Stephen’s college. She was awarded Chevening Scholarship and went to Oxford in order to complete her masters in the same subject. In the year 2005, she joined as a Rhodes scholar in Magalen College, Oxford. She got involved with progressive education systems and with organic farming in a small village near Madhya Pradesh after spending some time teaching in Andhra Pradesh at Rishi Valley School. Here she met some AAP members casually while working for non-profit organizations. She, as an advisor to Delhi’s education minister, she worked practically for free. She was getting a salary of “Rs. 1” per month of the incredible services she had done for the education system of Delhi.

When the BJP-led state government in the state of Madhya Pradesh is making “computer baba” and other “fraud babas” ministers, is it fair for the union minister to dismiss Atishi Marlena? Instead, she should be given some prestigious awards for her work in the field of education. Do you think so? 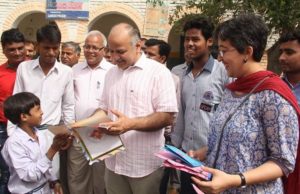 One Thought to “ATISHI MARLENA – THE WOMAN WHO TRANSFORMED DELHI’S EDUCATION SYSTEM FOR A SALARY OF RS. ONE”