None of us is unaware of the Indian snacks brand called Bikanervala. Bikaner city, founded by Rao Bika in 1486, celebrates its foundation day on Akshaya Tritiya in two days – Chhoti Akha Teej and Badi Akha Teej. The people living in this city celebrate their foundation day by eating special Rajasthani dishes and flying kites. The city with extreme desert weather is the fourth largest city in Rajasthan. Previously known as Jangladesh, the city in the Thar Desert considered an oasis on the trade route between Gujarat coast and Central Asia. Here we will discuss the population and population density of this city in 2021. 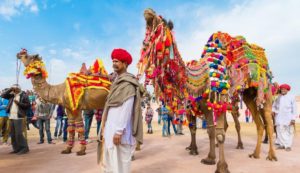 You should not miss the opportunity to be a part of Bikaner camel festival if you are visiting this beautiful city. Here you will get the biggest camel farm in Asia. National Research Centre on Camel is also situated in Bikaner. Bikaneri bhujia, bajre ka khichda, rabri, imli ka paani, and spicy papads are famous here. Another mention like thing is the 600-year-old Karni Mata Temple which is famous for its population of rats.