The Himalayan range is spread across India, Pakistan, Nepal, Bhutan, and China. The name of the range which offers some of highest peaks of the world, including the highest Mount Everest, is composed of two words – himá (snow) and ā-laya (receptacle, dwelling). It boasts over fifty mountains exceeding 7,200 meters in elevation, including ten of the fourteen 8,000-meter peaks. It also offers major rivers like the Indus, the Ganges, the Brahmaputra, and the Yarlung Tsangpo. The Himalayas, Giri-Raj or the King of Mountains, are home to a diversity of medicinal resources different parts of the plant – root, flower, stun, leaves and bark – which are used as remedies for various ailments. Having a profound effect on the climate of these five countries, the peaks of Himalaya are sacred in Hinduism and Buddhism. 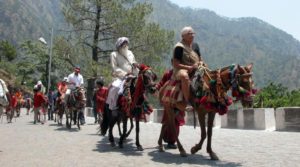 Indian poet Kalidasa said, “The Himalaya is a great devatatma, a great spiritual presence, stretching from the west to the eastern sea like a measuring rod to gauge the world’s greatness.” Also famous as Devanagari, the range of mountains is the pilgrim centers of Amaranth, Kedarnath, Badrinath, Mount Kailash and Manas Sarovar. The Kailas complex is directly related to life on earth and when we did schematic map ’city of the gods’. The Himalaya mountains four forces are made of ruby, crystal, gold, and lapis lazuli. It is a pillar of the world and is located at the heart of six mountain ranges symbolizing a lotus.

Interestingly, it is mighty in Hindu mythology. Even Mount Olympus in Greek mythology or Mount Fuji in Japanese mythology would ashen the greatness of the Himalayas. It is a divine place of rishis Devtas where they are doing tapscharya for the welfare of the world. Mountain Kailash is the heart of Himalaya which is often referred to as devtama or God–souled. Located in a crest some 3 Km away in Manali, Vashist temple, a public bathhouse, is one of the mysterious things; it is famous for its stone architecture. Jagatsukh, subjected to the happiness of the World, is known as the kingdom of Hadimba Devi. Vaishno Devi temple, located in a little cave is on the way to Kullu, is considered another house of Hindu Gods. As we all know, lord Shiva, lord Brahmma, and lord Vishnu form the Hindu trinity which is driven by millions of Gods. Himalaya is considered as the abode of Shiva and Shakthi – his ensemble. However, the Himalayan region is actually filled with a number of temples, Gurudwaras, Buddhist monasteries and churches dotting the landscape. In a single, it is the city of Gods.

One Thought to “HIMALAYAS, THE CITY OF GODS”