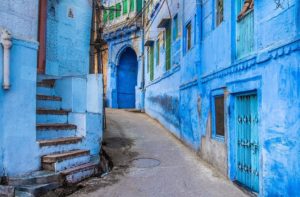 Most exciting part is the ‘HALL OF HEROS’ which houses sixteen large figures, carved out of a single rock. These monolith statues are either of popular Hindu deities of popular folk deities on their charges. The old city is unique to the place a visitor with its bazaars that vend handcrafts, textiles and other pieces of art. The old city is surrounding by a six-mile-long wall that has eight entrances. That place to wander around and take in the essence of the culture and architecture of this place. 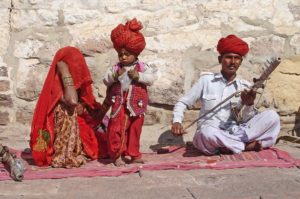 Jodhpur is famous as the blue city because most of its houses are painted in blue color. This blue color paint is a mixture of limestone and copper sulphate mixed in water and applied to the wall. There are two possible geographical reasons for color being blue. First is copper is a plentiful mineral in Rajasthan. Copper Sulphate may be very easily available at that time. The second is indigo plantations. There has been historical evidence of indigo plantation in Jodhpur it brings used for blue color.

There are many more reasons behind the blue color of the city. In Jodhpur, all houses of a particular part surrounding the Mehrangarh Fort are painted in blue color. Many years ago, when people realized the fact, they started painting their homes in blue color. It is one of the hottest and driest cities of Rajasthan. According to the people living in this city, the blue color helps them in keeping the heat under control during summer. The Brahmin communities started the blue painting across this city. However, most of the blue painted house belongs to the Brahmin cast. The last and inserting reason could be the termites. These on the face of it damage bugs we probably another reason for why these houses were painted in blue. They say that historically the little termites damage a large number of building structures of Jodhpur.

2 Thoughts to “JODHPUR – THE BLUE CITY OF INDIA”