The capital city of Madhya Pradesh is popularly known as the city of lakes. It was founded in the 11th century by the Para Mara king Bhoja. The modern Bhopal city, divided to two parts – old Bhopal and new Bhopal, was established by Dost Mohammad Khan in 1672 -1728. Ranked 3rd out 21 cities in India in 2014, the Bhopal Municipal Corporation is a house of education, science, politics, literature, research institution and institutes of national importance. The 17th largest city in the country is one of the greenest cities in India. The Bharat Bhavan is the main cultural centre of the city which was selected as the first twenty Indian cities to be developed a smart city. 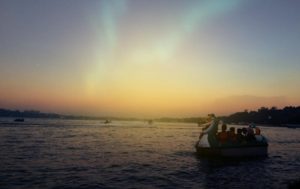 Among the major industries in the old city are medicinal, chemicals, cotton, electric goods and jewellery. There are other industries like cotton and flour milling, cloth weaving and painting, making matches, sealing wax and sporting equipment. There are large numbers of retail businesses handicrafts like zardori and batua are some of the product of the city. This city famous is made the translation of the Harry Potter series of the novel into Hindi. Five hills presented by this city are,

The 17th largest city in the country is one of the greenest cities in India. The tourist places in Bhopal are forts, palaces, caves and temples. There are many theatre lovers as Bharat Bhavan, Museums of man and Ravindra Bhavan. This city also famous its fair, Bhopal Haat, Gauhar Mahal, Bittan market ground and Dussehra Maiden. Bhopal is famous the city of lakes because there are many natural and artificial lakes. The complete range of lakes of the city of lakes includes 14 lakes which are listed below.

A huge earthen dam of 36.1 sq. km is constructed across the Kolans River. The lake which was created by Raja Bhoj in the 11th century is the most popular lake of the city of lakes. Upper Lake or Bada Talaab is arguably the oldest man-made lake in India. This lake had cured the skin disease of a king. Upper Lake, surrounded by human settlements, serves the residents of Bhopal as the major source of potable water. Upper Lake is also considered as the hub of sailing, motor boat riding, and paddle boating. Kamla Park is enhancing the beauty of Bada Talaab. 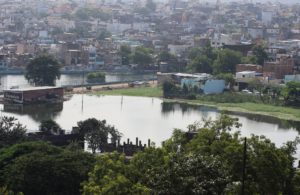 The Lower Lake or Chotta Talaab is a beautiful reminder of the great Mughal Empire. It is situated amidst massive Upper Lake and majestic hills. The lake which is separated from the Upper Lake by an over-bridge has been greatly affected by human settlements from all sides. Lower Lake is also a centre of sailing, paddle boats and motor boats.