Buddhism, based on the teachings of Siddhārtha Gautama, was started around the Kingdom of Magadha. It split into two branches – the Mahāsāṃghika and the Sthaviravāda – during the reign of Emperor Ashoka. Each of the branches further subdivided into numerous sub-sects throughout the subcontinent. The Theravāda in Sri Lanka and Southeast Asia, and the Mahāyāna in the Himalayas and East Asia are two major branches of Buddhism exist now. Indian Buddhists mainly live in the Himalayan region, southern India, and near the Myanmar border. Today about 7.5 million people practice this religion in India.

Central Asia came under the influence of Buddhism before the beginning of the Common Era. Due to their odd locations, the places like Mongolia and Tibet continued a distance with this religion until much later. Furthermore, Tibetan and Mongolian people who were travel lovers. The scenario in Tibet started changing in the seventh century. However, some of the Tibetans opposed Buddhism because they considered it as a foreign religion. In the Himalayas, you will find many temples, statues and religious monuments of Buddhism which speaks about its influence towards this religion. Buddhism in the Himalayas has a unique attraction among the locals and visitors. 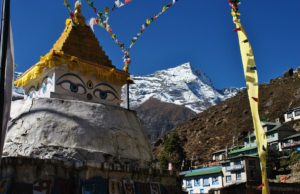 From Mongolia in the east to Kashmir in the west, the Himalayan range covers a wide geographic area which includes numerous civilizations dedicated to Buddhism. Sarvāstivāda Buddhism was dominant over MahĀyĀna Buddhism in Kashmir until the sixth century. However, MahĀyĀna Buddhism took a strong force within eighth to the twelfth centuries, when Buddhist art in Kashmir developed a characteristic national style. During this period, Buddhist art in Kashmir was embodying elements from Gupta, Gandhāra, and Syrian-Byzantine styles.

It is a surprising fact to know that a few early Kashmiri Buddhist sculptures in stone, sculptures in bronze, and a life-size standing bodhisattva unearthed at Pāṇḍrēṇṭhan have survived. Kashmiri bodhisattvas were generally ornamental, with a lush surface. But the Buddha, in this region, was often represented seated and wearing a crown. In Nepal, there is a close technical and structural parallelism between religious and nonreligious buildings. Nonetheless, the Buddhist art in Nepal shows Nepal’s closeness to Northern India.

11 Thoughts to “BUDDHISM IN THE HIMALAYAS”