Dashrath Manjhi, who is popularly known as the Mountain Man, was born in 1937 in Gehlour village, Bihar. The village is situated in Mubra Tehsil in the district of Gaya. Belongs to a poor family, Manjhi runs away from his home at a young age and works in Dhanbad coal mines. He returned to his village after seven years. Dashrath got married in his childhood keeping with the traditional and cultural norms of his caste. After falling in love with a village girl, Falguni Devi, he tied a knot with her. She became pregnant within a short time and gave birth to a baby boy.

Mirza Shahab-ud-din Baig Muhammad Khan Khurram, widely known as Shah Jahan, was the most capable of Emperor Jahangir’s four sons. He emerged as victorious and became the fifth Mughal emperor after his father’s death. The period of Shah Jahan’s reign is widely considered to be the golden age of Mughal architecture. The king married Mumtaz Mahal. When Mumtaz Mahal was giving birth to their 14th child due to some complications she died. After her death, Shah Jahan was so heartbroken. Then he was decided undertook the task of world most beautiful dream in memory of his love. Taj Mahal, the 561 feet long tomb, is doubtlessly the lead name in this regard. Shah Jahan’s imagination of Mumtaz’s home in paradise took 22 years to be completed. Shah Jahan died in 1666; his body was placed in a tomb next to the tomb of Mumtaz Mahal. 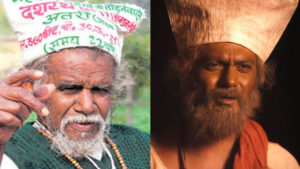 On the other hand, Dashrath Manjhi carved out a 360 feet long mountain within the same period. And he did it for his beloved wife. His less known love story deserved to be compared with wealthy Mughal Emperor’s so-called love story. Falguni slipped from the mountain and carried to a hospital which was 70 kilometers from the village. It was a story during her pregnancy when she was climbing the mountain in the scorching heat. The unfortunate wife died in the mid-way, but she gave birth to a baby girl. Manjhi loved Falguni more than anything else. Being sad, Dashrath decided to carve out a path so that no other people suffer like her wife.

He continued his work, day in and day out. With no food and no water, he started drinking dirty water and eating leaves. After 22 years of hard work, Dashrath single-handedly carved out 360 feet long, 30 feet high and 30 feet wide road through the mountain. Finally, in 1982, the government took the decision to make a road by carving the mountain.

Bihar CM Nitish Kumar considers ‘Mountain Man’ Dashrath Manjhi’s effort as an extraordinary job. On Aug 2007, Dashrath Manjhi, at the age of 73, passed away at all India Institute of Medical Science in New Delhi. He died due to his gallbladder cancer. After his death, the government officially names the road as Dashrath Manjhi path. Bihar government also proposed his name for the Padma Shree award in 2006 in the social service sector. We salute to the indomitable love and spirit of Manjhi.