Golden Temple, Sri Harmandir Sahib (The abode of God), is considered as the most celebrated shrine of the Sikh religion. Guru Arjan, the fifth Sikh Guru, designed and developed the place of sublime peacefulness. He then installed Adi Granth, the holy scripture of Sikhism, inside it. Even though Guru Arjan initiated the construction of Gurdwara, its foundation stone of this Gurdwara was laid by Muslim saint Mian Mir on 28 December 1588. It took 16 years to be completed. Over a lakh people, regardless of religious distinctions, visit this beautiful shrine daily. Its name, Sri Harmandir Sahib, literally means the Temple of God.

Surrounded by a manmade lake filled with unique varieties of fishes, the top portion of the temple is made of pure gold. But it was initially built without any gold coating. Maharaja Ranjit Singh, in the early 19th century, renovated this temple and made into what it is today. Topped by a dome gilded with 750 kilograms of gold, it is a perfect blend of Hindu and Islamic architectural styles. As the Mughal masterpiece, Taj Mahal, flowers and animal motifs are visible in this masterpiece.

We all know that philosopher-saint Guru Nanak came to live and meditate in this holy lake in the midst of a quiet forest, but very few among us are familiar about its connection with Buddhism. It was a story of two thousand years back. Most of us must be surprised to know that Lord Buddha came to spend time at this place in contemplation. So the founder of the Sikh religion followed the footprints of the founder of Buddhism, knowingly or unknowingly. During special religious events, the temple serves up to 200,000 people which is apparently a fact of surprise. The Golden Temple, however, signifies the importance of acceptance and openness. 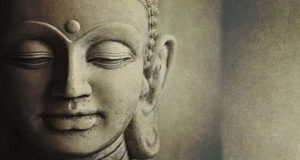 One Thought to “DID LORD BUDDHA MEDITATE AT GOLDEN TEMPLE?”