Central Asia, including the Himalayas, is the third largest deposit of ice and snow in the world. The Himalayan range stores about 12000 km of fresh water and offers about 15000 glaciers, including the Gangotri, Yamunotri, Khumbu, Lang tang and Zemu glacier. Most of the Himalayan glaciers enter in Sikkim, Jammu and Kashmir, Himachal Pradesh, Uttarakhand, and Arunachal Pradesh. World’s ten largest glaciers include Biofo glacier in Pakistan, Perito Morino glacier in Argentina, Maguire glacier, Glacier Bay in Alaska, Pastaze glacier in Austria, Furtwangler glacier in Tanzania, Fox and Franz Josef glacier in New Zealand, Jostedalsbreen glacier in Europe, Siachen glacier between India and Pakistan, and Fedchenko glacier of Tajikistan in central Asia. 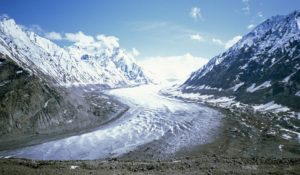 There are 198000 glaciers on the planet, in which more than a 25% found in the Himalayas. As they provide water to ten major Asian rivers, the glaciers of this range have been described as the water towers of Asia. More than a billion people in Asia depend on the supply of fresh water coming from the glaciers. That’s why the impact of climate change in the Himalayas region could be the reason behind the worry of a billion people or more. Many Himalayas glacier is losing ice mass because of decreased snowfall and higher average air temperatures. Nonetheless, the lower glaciers are melting faster than the upper ones. It is predicted that 5500 glaciers in the Mount Everest region are likely to disappear or drastically retreat as temperatures increase with climate change over the next century. They could reduce their volume by 70%-99% by 2100. 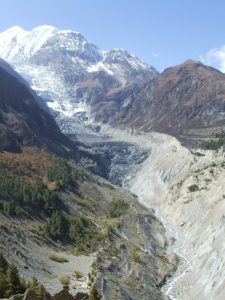 As per a study was done by NASA’s Goddard Institute for Space Studies, particulate matter, mainly black carbon from coal-fired plants in India and cooking fires are the real reason behind melting of mountain glaciers. Interestingly, carbon dioxide is not melting the glaciers in the Himalayas. These culprit particulates absorb sunlight and heat the surrounding atmosphere which melts glaciers. They can also melt the ice when they precipitate out of the air and land on it. Ice and snow reflect typically the sun’s energy back the way it came. But a dust layer on top of the ice absorbs the sunlight and warms the ice below. Hence, it melts it.

On the opposite side, some glaciers, as per a study published on Sunday in the Nature Geoscience journal, are gaining mass kicking the global trend of glacial decline. The study has estimated that Karakoram glaciers have attained around 0.36 feet to 0.72 feet annually between 1999 and 2008. “Our conclusion that Karakoram glaciers had a small mass gain at the beginning of the 21st century indicates that those central/eastern glaciers are not representative of the whole (Himalayas),” the experts at France’s University of Grenoble said.